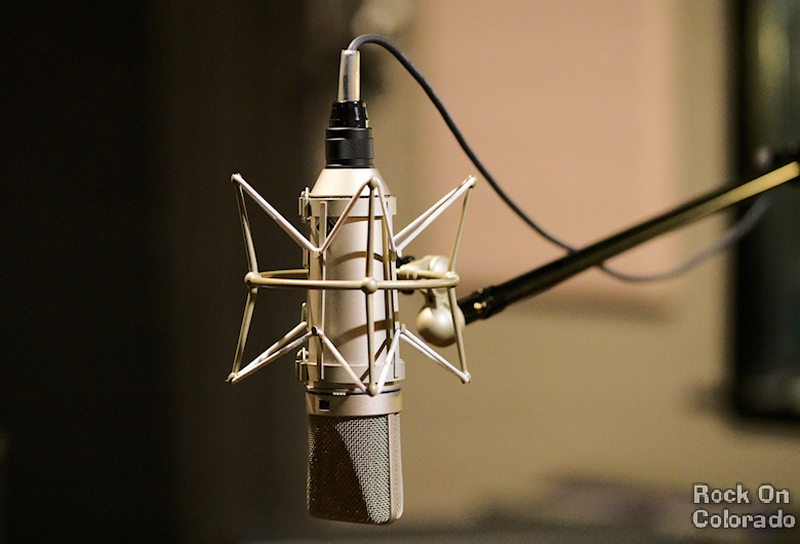 I am recording a new album! I am recording at The Keep Recording studio in Denver. This project is being financed by my fans and friends, through monthly contributions from my fan club, The Misfit Club, and by single contributions. Read all about it below, and click the Donate button to be a backer.
(If you select the Paypal Family and Friends option, I won't be charged the Paypal fee.)
Thank you for your support! --Rob Roper


Jeremy Lawton and Dave Preston came back to the studio last week to complete keyboards and lead guitar, respectively. I completed the recording of lead vocals just before Christmas, except for "The Way," which will be done next week. I would say we are now 80% done with the recording process. I have a few guitar parts left to do. Backing vocals will be done in early February, with my voice teacher, Molly Zackary, directing that.

Financing for the project continues to trickle in. I've now received about $1,500 in contributions from friends and fans. I helped my fundraising cause by selling my beloved 1961 Fender Deluxe amplifier to pay some of the bills. That brought in $2,600. I'm also donating my entire $600 federal government stimulus check to the cause. Monthly dues from members of my fan club, The Misfit Club, brought in about $500 over the past 2 years, and sales of CDs, downloads and streaming income over the past several years have brought in about $660. That brings the total raised for the project to about $5,800, just over a third of the minimum needed to record, mix and master the songs. Anything I raise over $15,000 will go to promotion, such as videos.


I spent 3 days at The Keep Recording studios recording lead vocals for the new album. My voice teacher, Molly Zackary, was present via a Zoom session for two of the sessions. I've been taking lessons from Molly over the past six months, and she has raised my vocal skills to a new level. Those of you who have heard my previous recordings, or seen me play live, will notice the difference.

Co-producer and engineer Jeff Kanan and I also began work editing the tracks that have already been recorded. For a couple of songs, we made slight changes to the arrangements. On January 5, Jeremy Lawton returns to finish up the keyboards, and the following day, Dave Preston returns to finish up lead guitar. Backing vocals will be recorded in early February. Molly will work with me on the vocal arrangements.

Funraising for the project continues to creep along. I have now raised just over $2,000 from one-shot contributions, The Misfit Club, and CD/Download/Streaming sales. You can help fund this project by clicking on the Paypal button above, joining The Misfit Club, or buying a CD or Download on my Rob Roper Bandcamp site, or my Total Flower Chaos Bandcamp site.


I spent December 1 and 2 at The Keep Recording studios, with Jeremy Lawton recording keyboards, and Dave Preston recording acoustic and electric rhythm and lead guitar layers. Both those guys are great musicians, and contributed both craftsmanship and creativity to my songs. To say that I was excited would be a gross understatement. I can't wait for the world to hear this music; it will be, by far, the best music I've ever recorded.

The only thing not going well with this project is the fundraising. My costs have already far exceed what I've raised so far from my supporters. Professional musicians like Dave and Jeremy have to be paid, and so does the studio and engineer. You can help fund this project by clicking on the Paypal button, or join The Misfit Club. 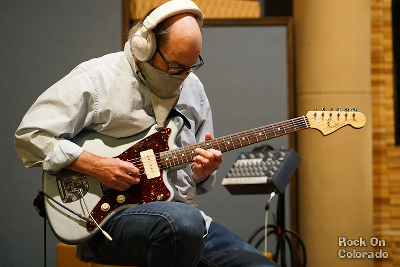 Who's that guy? (photo by Dave Barber)


To reduce costs, I'm currently recording the electric rhythm guitars for the album at home. The sound quality isn't quite as good as it would be at The Keep Recording studios, but because I'm close-mic'ing the amps at home, with a pretty good microphone (Sennheiser e906), the poor quality of my music room at room doesn't matter as much. And it allows me to do multiple takes on each part-- to fix mistakes, or try different guitars and amps-- without paying $60/hour.

Still, I plan to record some guitar layers The Keep, in order to take advantage of room mic'ing, with great microphones, for a bigger, atmospheric sound on some tracks. There are also going to be a few songs where I'll record an acoustic guitar layer, and I definitely have to do that in a studio. I'll be doing all these guitar parts on December 1.

Fundraising is coming along, although slower than I would like, as you can see from the charts to the right. If you would like to help fund this project, please click on the Paypal button, or join The Misfit Club.


I spent two 10-hour days in The Keep Recording studios on November 6 and 7, recording "basics"-- drums, bass and rhythm guitar. It was very productive-- we got 13 songs done, and 2 instrumentals. Ryan Elwood did a great job on the drum tracks, and Ryan Watts laid down great bass tracks. Jeff Kanan did a great job engineering and co-producing. I am very happy; we now have a solid foundation to build on. Here's a few photos taken by Dave Barber. To see more, check out Dave Barber's awesome website, Rock on Colorado, which has hundreds of photos of Denver bands performing. 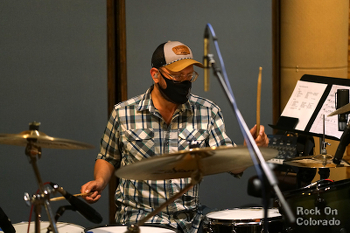 
Yesterday, Jeff Kanan (engineer and co-producer) and I finished up the "pre-production" work for the album. I made this quick cellphone video so y'all can see the inside of The Keep Recording studio. Enjoy!


Starting tomorrow, I will spend 3 days in the studio with Jeff Kanan, the engineer and co-producer, doing what is called "pre-production" work for the album. That includes determining the the arrangements for the songs (how many measures for the intro, outro, solos, etc.), and perhaps modifications to the songwriting-- either lyrics or music. We'll decide the exact temps for the songs in beats per minute, and create charts and scratch tracks for the drummer and bass player to play to during the first "production" session, known as the "basics" session.

It will be interesting to hear what ideas Jeff has for my songs. I've given him the home demos I made so he can cut them up and rearrange them. I'll also bring an acoustic guitar so we can try different ideas and tempos. We'll kick around ideas, try things, argue (in a constructive way) and finally settle on an arrangement for each song. I'm sure the final result will be better than what I would have thought of by myself. Check out Jeff's experience on his bio.

Things aren't going well on the fundraising front, as you can see from the chart on the right. I still only have 3 fans in The Misfit Club, and have not received any one-shot contributions yet. The contributions from those 3 fans in The Misfit Club the past 2 years will mostly cover the pre-production sessions, but that's it. Hopefully more fans will step up and get behind this album project in the next couple of weeks.


Ten years ago, in 2010, I recorded my first full-length album, Misfit. It was released the following year, in 2011. Ten years later, in 2020, I am going to record "Misfit 2." I will probably give it a different name, but that's the idea-- it will be a full-length recording-- my biggest recording project since Misfit.

I have chosen The Keep Recording studio for this project, with owner/chief engineer Jeff Kanan as both my engineer and co-producer. He has enormous experience as an engineer and producer, both in LA studios, and with numerous Denver bands and artists.

Like Misfit, I will hire a professional graphics artist to design the artwork.

I have narrowed the list of songs down to these 13. The album will be somewhere between 10 and 13 of these. The year I wrote them is in parentheses. 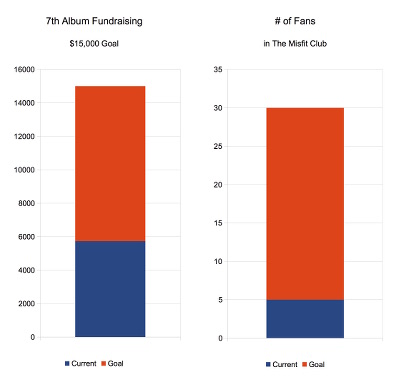 The minimum required is $15,000. That does not include any promotion-- review campaign, radio campaign, or videos for songs. That just gets the album recorded, mixed and mastered. It pays the studio engineer and musicians, as well as the graphics artist, and includes a mininum run of CDs to autograph for my contributors. I hope to raise more than the minimum so I can promote the album!

The main way I'm paying for this album is through my fan club, The Misfit Club, which is part of my Bandcamp site. These are fans who contribute a set amount each month. In return, you get free downloads of all my recording music, exclusive access to home demos, live recordings, and songs from my old bands. You also get free admission to all my ticketed shows, live or internet.

Folks who want to just make a one-time contribution to the album project can contribute via my Paypal account. Just click the button below. (If you select the Paypal Family and Friends option, I won't be charged the 3.2% fee.)


Thank you for your support!